Man and child from Exodus 1947
Note: For many years, Descendants of Abraham Klotz believed this photograph was of Melach Schubert and his son Zeev, who were passengers on the ship Exodus 1947. However, assistance from the Exodus project at the U.S. Holocaust Memorial Museum has helped determine that the photo shows someone else. The photo was taken at a Displaced Persons camp in Germany where the Exodus passengers were housed after the fateful voyage. The story of the Exodus is summarized below. 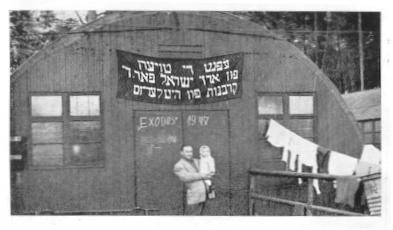 The Schuberts were among approximately 4,550 Jewish refugees from World War II aboard the ship Exodus 1947, which sailed for British-controlled Palestine from France on July 10, 1947. Britain had tightened the Jewish immigration quota for Palestine and was sending Jews who ran the blockade to internment camps in Cyprus. The camps were overflowing, and the Exodus, the largest refugee ship to date, was treated differently.
The British attacked the Exodus in the Mediterranean and sent the refugees back to France on prison ships. The refugees refused to disembark in Europe -- it was Eretz Yisrael (the land of Israel) or nothing. After three weeks, the British sailed the prison ships to Hamburg, Germany, and said they would force the refugees off the boats with tear gas and bring in troops if they had to. The refugees went ashore peacefully on Sept. 8.
Around the world, public sympathy was with the Jewish refugees, and the British endured a storm of disapproval. Worldwide reaction to the plight of the Exodus refugees was instrumental in persuading the United Nations Special Committee on Palestine to recommend partitioning Palestine and establishing a Jewish state.
In Germany, the Exodus refugees were held in Displaced Persons camps in a British-occupied zone. A few at a time over the course of a year, the Exodus refugees left the camps and reached Palestine, some with legal immigration permits and some illicitly. Many of them were already in Israel on May 15, 1948, when the nation declared its independence.